ATREG is pleased to announce that it has successfully advised Elmos Semiconductor SE on the disposition of its operational automotive-certified 200mm manufacturing facility located in Dortmund, Germany. Elmos has entered into a definitive sale and purchase agreement with Silex Microsystems AB, a pure-play MEMS foundry headquartered in Järfälla, Sweden, for a net purchase price of €77.5 million plus around €7 million for the work-in-progress inventory, totaling approx. €85 million. The transaction is expected to close in the second half of 2022, subject to customary closing conditions and regulatory approvals. The transaction includes a long-term supply agreement until at least 2027, with Elmos buying processed wafers produced at the fab. 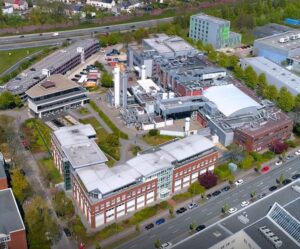 “This transaction is an important structural alignment of our manufacturing strategy. And it provides a long-term perspective with new products and technologies for the Dortmund wafer fab and its employees,” explains Elmos CEO Dr. Arne Schneider. “The ATREG team has been instrumental at bringing the right caliber of global buyers to the table and demonstrated the creativity needed in structuring a transaction model that met all of our business objectives.”

“Global demand for 200mm fab assets has been at an all-time high this year and we expect it to show no abatement in 2022,” adds Stephen Rothrock, president and CEO of ATREG. “The unique structure of this transaction is a win-win for Elmos and Silex. We are very pleased with the outcome for both parties.”

ATREG recently sat down with John Neuffer, President and CEO of the Semiconductor Industry Association (SIA) headquartered in Washington D.C., to discuss U.S. federal investments in domestic chip production so far and what the industry can expect in terms of support from U.S. policy in 2022.

What has happened over the last couple of years to motivate U.S. policymakers to take action in support of domestic semiconductor research, design, and manufacturing?

A confluence of factors has highlighted the urgent need for U.S. government investments in domestic semiconductor production and innovation. First, the shortage of personal protective equipment (PPE) and ventilators early in the pandemic spurred a greater awareness of supply chain vulnerabilities for other critical products, including semiconductors. Second, the global chip shortage has broadened concerns about chip supply chain vulnerabilities. And third, ongoing U.S.-China tensions have led to efforts in Washington to reinforce U.S. technological competitiveness, including in semiconductors, which are essential to America’s economy, national security, and critical infrastructure. 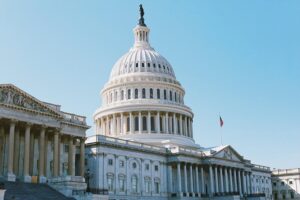 What kind of impact would federal investments in domestic chip production have on the U.S. economy? 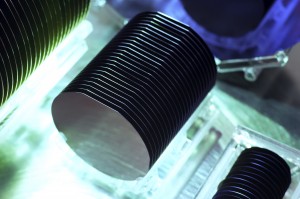 What do you make of the recent announcements by several semiconductor companies of plans to build new fabs in the U.S. or expand existing ones?

We see the announcements of major semiconductor manufacturing investments as a sign that chip companies believe the U.S. government is serious about making America a more competitive place to locate chip production. Now it’s incumbent upon the U.S. government to get the CHIPS Act and an expanded FABS Act across the finish line, so more of the semiconductors our country needs are researched, designed, and manufactured on U.S. shores.

What should we expect in 2022 when it comes to the global chip shortage and U.S. policy?

Industry leaders have been working around the clock to address the global chip shortage. In fact, by the end of 2021, we will have shipped more units to our customers than during any other year in history, and we expect to set yet another record in chips shipped in 2022. All of this will, we believe, land us in a much better place next year when it comes to resolving the shortage issues. To help address the longer-term problem, we believe government should focus its efforts on ensuring the strength and resilience of America’s chip supply chains by funding the CHIPS Act and enacting a strengthened FABS Act. There is broad, bipartisan support for strengthening domestic semiconductor research, design, and manufacturing, so America’s chip supply chains are stronger for the future. Those backing funding for the CHIPS Act include many CEOs and other business leaders (including semiconductor industry leaders), U.S. governors, members of Congress, national security experts, and others. Given this strong support, we are optimistic leaders in Washington will fund the CHIPS Act and enact the FABS Act in early 2022 to shore up U.S. chip supply chains for many years to come. 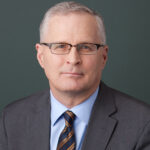 John Neuffer has been President and CEO of the Semiconductor Industry Association (SIA) in Washington, DC since 2015. He is responsible for leading the association’s public policy agenda and serving as the primary advocate for maintaining U.S. leadership in semiconductor design, manufacturing, and research. Prior to SIA, John served for seven years as SVP for Global Policy at the Information Technology Industry Council. For the previous two years, he was Deputy Assistant U.S. Trade Representative for Asia-Pacific Economic Cooperation (APEC), preceded by five years as Deputy Assistant U.S. Trade Representative for Japan. For nine years before his government service, John was a Senior Research Fellow and Political Analyst with Mitsui Kaijyo Research Institute in Tokyo where he was a leading commentator on Japanese politics and policy.

As 2021 comes to a close, ATREG wishes you and yours a healthy and festive holiday season! Our team is very grateful and thankful for the continued loyalty and support of our valued clients and partners. This year again for the holidays, we will be making donations on their behalf to the following local and international non-profit organizations:

Wishing you and yours health, happiness, and success in 2022! 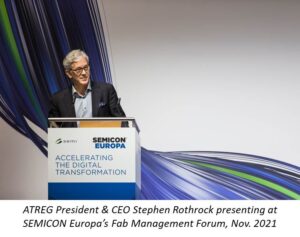 This past year has yet again proven the continued resilience and endurance of the global semiconductor industry. To mitigate the global chip shortage left in the wake of the world’s COVID pandemic, semiconductor manufacturers have left no stone unturned to find ways to increase capacity and soften the blow on production disruption in the many industries relying on electronic components. In the space of just five short years, the fab buyers’ market we got accustomed to suddenly morphed into a fab sellers’ market, and as a result, a larger than usual number of announced or closed worldwide in 2021 (nine total).

The reasons for this comeback can be summarized in a few words – tight supply constraints, risks associated with a tense geopolitical environment, companies put on allocation (especially SMEs), and steady rises in prices. Sitting in the front row of the global fab transaction market for the past 22 years, ATREG’s President and CEO Stephen Rothrock was invited to share some of these market insights during SEMICON Europa’s Fab Management Forum held in Munich, Germany last month.

As you can see from Graph 1, the number of high-volume front-end fabs is not huge with only 73 total (not including the five fab transactions happening in 2021). There has been a surge in fab deals after the 2008-2010 recession followed by a significant tapering off from 2015 to 2020 with an average of 4.5 fabs sold per year. Consolidation was a major factor contributing to this low number due to some 250 M&A deals made over a 12-year period and valued at over $500 billion, nearly three times the amount of the previous 12 years. ​​Thirty-six 200m fabs were sold and in 2021, that trend continued with five, four of which are 200mm. The largest transaction that took place in 2021 which was facilitated by ATREG was Texas Instruments’ acquisition of Micron’s operational 300mm fab located in Lehi, UT. The deal included the transfer of the fab’s entire local workforce (1,215 employees), a major asset in and of themselves in today’s tight labor market.

Now, if we look at the fab breakdown by country or region in Graph 2, what does it tell us about how we can solve the global fab shortage? Existing fabs are running at over 100% capacity and tools are constrained. Many 200mm users are buying 300mm fabs to then calibrate them back to 90nm, .13, and .18 nodes. Fabs such as the former Qimonda 300mm shell in Richmond, VA being represented by ATREG are entertaining visits to restart. Companies such as Jacobs, Exyte, and Hoffman are evaluating how they can renovate, reengineer, and build fabs faster than ever before.

Compound semiconductor, GaN, GaA, SiC, and MEMS users need and want fabs, so is greenfield the answer to all of our problems? BOSCH thought so and kept it home in Germany with a build in Dresden. Across the pond, Wolfspeed (formerly Cree) is putting the finishing touches to the world’s largest greenfield silicon carbide device manufacturing facility at the Marcy Nanocenter near Utica in Upstate New York / Mohawk Valley, with the help of a $515 million incentive package from the state of New York. In the southern U.S., Intel, TSMC, and Samsung are planning or have broken ground on greenfield fabs in Arizona and Texas. 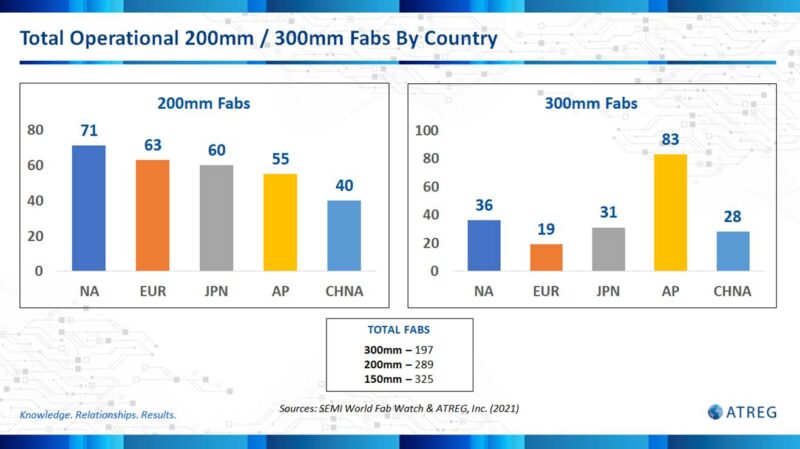 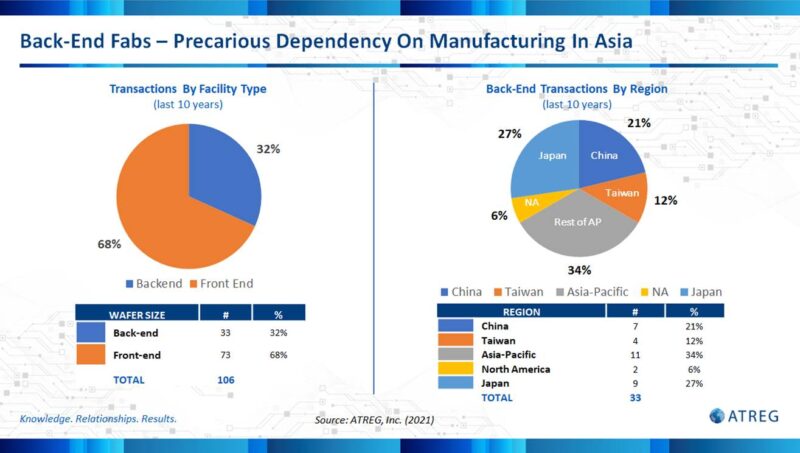 Out of 66 new fabs built between 2020 and 2022, 30 or 45% have been / are being built in China. An additional 49 fabs are expected to come online in 2023 / 2024. Opening a fab in the U.S. or Europe used to affect only one small part of the manufacturing process. Today, with the localization craze driven by politics rather than science or business, semiconductors are often designed in the U.S. or Europe, tested and assembled in SE Asia, fabricated in Taiwan or South Korea, and installed into products in China. The semiconductor industry is a highly specialized and interdependent ecosystem. If one country fails, the whole group fails! Greenfield may be an attractive answer to the global chip shortage, but at a phenomenal price tag, not to mention the many impediments still present, including entitlements such as certification​ as well as the lack of qualified construction workers in certain regions.

2021: The turning point for fab demand

This year was a true turning point from a fab market demand perspective. By December 31st, a total of five fabs will have changed hands. To illustrate this new normal, here are some real-world statistics showing how global demand for fab assets has risen this year and the reasons behind it: 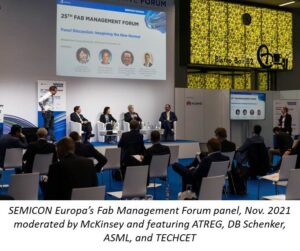 With the continued global shortage of operational brownfield fabs, manufacturers are taking the future of their supply chain into their own hands. Here are some concrete examples:

Compound semiconductor, MEMS, and advanced packaging companies are currently seeking mid-tier fabs and they’ll decide to go for greenfield if they can’t find adequate available brownfield facilities on the market.

So where do we go from here?

What do we need? What should we expect from the global manufacturing asset market going into 2022 and beyond? What is certain is that we are going to have an unprecedented year again. Having said that, many challenges still lie ahead:

Should you wish to discuss your manufacturing asset acquisition or disposition needs for 2022 and beyond, please contact us to set up an appointment with a member of our team. 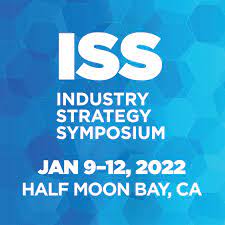 ATREG will attend SEMI’s annual Industry Strategy Symposium (ISS) to be held from January 9 to 12 in Half Moon Bay, Calif.

Need to dispose of or acquire a brownfield fab or cleanroom? Looking for a brand-new greenfield building location or extra loading capacity? ATREG can help! Please email us to set up an appointment with a member of our team at the event to discuss your infrastructure-rich manufacturing asset needs. We look forward to seeing you there!